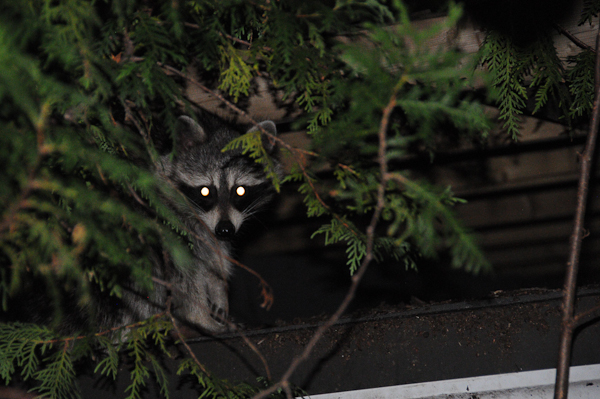 Most think only of animals as wildlife. I wanted to make a point that “wildlife” is not just animals. It includes plants, too. It encompasses all living organisms apart from humans and other domesticated species.

Biodiversity in the City

Well, it is spring and more people are on the move outdoors which usually means more encounters with wildlife, both positive and negative. I had been thinking of urban wildlife lately, given a recent occurrence in which a coyote was shot by Toronto Police and an opinion piece which was published in the local paper: “Time to cull city’s nasty raccoons” – all on the eve of the Biodiversity in the City workshop that I will be attending in two days time.

The workshop is being put on by ICLEI – Local Governments for Sustainability. They are developing a guidebook for Canadian communities on biodiversity management, and are looking to the active community of local practitioners, municipal staff, and conservation authorities to help answer these questions:

Why should we protect biodiversity in urban areas?

How can municipalities manage urban biodiversity?

I expect the workshop will have a pro-wildlife stance, but it’s difficult to predict with some government officials. Toronto Wildlife Centre, Toronto Animal Services and Toronto Region and Conservation are certainly pro-wildlife. I’m not sure if other departments will be involved like Municipal Licencing and Standards (MLS). Most bylaws are not wildlife-friendly, as evidenced by the many anti-vegetative provisions in bylaws, including the Grass and Weeds bylaw and the Property Standards bylaw that I discussed briefly in previous posts: A tale of two city yards and Living on the Edge – Boulevard of Broken Dreams.

I hope we get a mix of interested parties including those who feel wildlife, particularly wild animals, have no place in the city. Indeed, the comments about the coyote shooting were split very sharply between pro-wildlife and anti-wildlife. Comments included “wildlife doesn’t belong in the city” and “the last time I looked the people of Toronto were paying the taxes for the right to live in this city and not wild animals.” When I hear comments such as these, I shudder and fear that the attitude is so hostile that wildlife would be unacceptable anywhere. Carole Sevilla Brown addressed similar concerns in a post: Helping Your Neighbors Learn to Love Wildlife It is an ongoing struggle to educate people and rally for wildlife.

And then there’s the other faction: the “they were here first” camp. Wildlife pre-dated the appearance of humans so they should have more right to stay. I don’t like to get into this type of argument. It’s all very well to try to put all Nature first; all life together as equals or having an equal stake in the planet. But the reality is humans are calling the shots. They-were-here-first argument does not have credence most of the time even among humans. A neighbour who is established does not have more rights than a new neighbour. They both are equal in the eyes of the law, unless there is a “grandfathering” of a bylaw, for instance. The first-here argument does not get us anywhere. (Let’s not even go near the argument of first-here with native vs exotic, either).

It reveals quite a dichotomy in opinion and the level of fear and ignorance which we encounter. And as we know, fear comes largely from ignorance. Again, education is the solution.

The City and Wildlife

Wildlife is never far from my mind. I’m trying to maintain a welcoming oasis amidst a desert of conventional yards, much of which has little wildlife in the form of plants or animals (or other organisms). Yet, wildlife will move through looking for food and shelter and mates, regardless of the type of garden, whether immaculate lawn with clipped shrubbery or a wild, native paradise. Wildlife is living amongst us and we have to deal with it.

As the human population increases, incidents of human-wildlife encounters will also increase. Right now, my city, Toronto, ranks as being the fourth largest city in North America, that is, in human population (just shy of 2.8 million). A press release bragged about surpassing Chicago as the fourth most populous city after Mexico City (8.9 million), New York (8.2 million) and Los Angeles (3.8 million).

A large human population is not something to brag about. It comes at a cost to our planet. What will that do to our wildlife? Are we welcoming or accepting? Or is the welcome mat only reserved for people? Are we pushing out wildlife inadvertently or even deliberately? These are only some of the questions arising and I feel mixed messages are being given out by government sources.

Wildlife Gardens – are we creating a problem?

Are we concerned that by creating wildlife gardens, we are attracting some species that we are hesitant in inviting to stay, like raccoons, skunks, foxes, coyotes? Are we reluctant to have medium-sized carnivores roaming our streets? By planting shrubs, having woodpiles, etc., are we encouraging wildlife to set up homes in our gardens thereby allowing them to get more comfortable before they try to invade our homes, garages, sheds, decks, and balconies?

If you feed birds, the seeds can attract mice and rats (“vermin”). It can also encourage squirrels which foxes and coyotes prey on. But the activity also attracts raptors much to the horror of some gardeners with bird feeders. If you have wood piles are you attracting termites or carpenter ants which can damage wooden structures?

All of these concerns need to be addressed at some point.

This is always a good place to start; to get an idea or some direction. However, bylaws are typically vague and bereft of definitions that would be helpful for the gardener. My local bylaw The Property Standards Bylaw, Toronto Municipal Code Chapter 629 is no exception.

All properties shall at all times be kept free of rodents, vermin, insects and other pests and from conditions which may encourage infestation by pests.

D. The receptacles shall be containers that are water-tight, equipped with a tight-fitting cover, rodent- and pest-proof, and shall be maintained in a clean state.

G. The place for temporary storage and disposal of garbage and refuse shall be kept in a litter-free and odour-free condition, maintained in a manner that will not attract pests, create a health or other hazard, or obstruct an emergency route, recreation facility, parking area, driveway or walkway.

As a biologist, I take exception to the lack of definitions and some of the terminology. “Free of rodents” – does that include native species: ground and tree squirrels, beaver, muskrat, mice, and voles; all of which are found within city limits? Depending on your location and on the species, native rodents may be a regular, infrequent or non-existent visitor to your property.

Vermin! What does that conjure up? Back to the dictionary to make sure I get the definition straight. “Pest” is a synonym. After checking several sources, they all agree on three things:

2. Animals that prey on game, such as foxes, weasels or coyotes

I think we can all agree that “infestations” are not a healthy situation. Animals that compete directly for resources which humans covet (“game”) are included. I don’t think this has bearing in urban areas since there is no hunting or trapping allowed within city limits (unless an agency is authorized to remove animals). I’m not sure if skunks and raccoons are considered vermin. Certainly, homeowners who have their refuse invaded or who have their beloved lawns ripped up by wildlife intent on scoring juicy beetle larvae would consider them pests. Unfortunately, I doubt the bylaws will help with No. 3.

Other issues with the bylaw: All insects are being lumped in with pests. Clearly the bylaw is out of date and does not reflect the fact that insects and other organisms are a necessary part of an ecosystem, including the urban environment. The bylaw needs a revamp if we are to appear to be a wildlife-friendly city.

Are urban animals just part of the city fabric to be treasured or are they a nuisance that needs to be exterminated?

This is one example of mixed messages. A negative association with wild plants, or “weeds” pops up in several bylaws. Yet, wild animals are another matter: The City of Toronto endorses wildlife (animals) and suggests that we have to learn to live in harmony.

The emphasis is on protecting your home:

“We share the city with a wide variety of animals that have adapted to our urban environment. Find out how you can protect your property and live in harmony with the city’s wildlife.”

With respect to home invaders (note: animals only):

“We will always have wildlife within our city environment, and we will have problems with these animals until we take preventative measures to reduce their populations by making sure they can’t live in our homes.” Well, at least they are not in denial and recognize that we inhabit our city with non-human residents. That is a start. They do give some good information about wildlife-proofing your home, and deterrents such as a prevention skirt or barrier to prevent wildlife from digging dens under a house, deck, shed, or garage. In other regards, they are off base.

The statement given does not make sense as the problem is not a housing issue for wildlife, but readily accessible food from sloppy garbage practices, improper compost maintenance, and pet food left available for opportunistic wildlife.

(Pet owners – do you really want your pet to eat from the same bowl as a fox, raccoon, skunk or coyote given that saliva exchange could lead to the spread of pathogens?)

Also, the recommendation to use naphthalene or moth balls/flakes to discourage invasion is not something that I would endorse. Moth balls are toxic and we don’t need another poison in the garden; a threat to the environment.

The city discourages the keeping of wood piles, probably to prevent termite and carpenter ant colonies. But it is counter to our mission to create habitat for various organisms such as invertebrates, toads, salamanders, etc., as mentioned in Christy Peterson’s post: Kids in the Wildlife Garden—In Praise of Underneath and for overwintering wildlife like butterfly adults: Mourning Cloak, Question Mark, and Eastern Comma mentioned in Pat Sutton’s post: Butterfly House.

We can’t be neat freaks and expect wildlife to thrive, as some of our other team members have pointed out – Tony McGuigan in Not-So-Clean Up Garden and Vincent Vizachero in Cleanliness in a Wildlife Garden: Bad Idea.

Certainly foraging woodpeckers (sapsuckers, etc.) could deal with wandering carpenter ants. And if the foundation of any wooden structure is not in direct contact with soil, termites cannot go about their normal business.

All it takes is a little common sense, some knowledge about potentially, destructive activities of animals and how to do damage control.

We will have to learn how to live with wildlife as wild organisms will always be with us.

With some precautions, go ahead and create natural food sources but control the easy pickings (compost, garbage, feeders, pets).

If we have an over population of “nuisance” animals, we have to stop feeding them and control our waste practices better.

If you have concerns, suggestions or comments, I’d love to pass them along at the workshop, even if you don’t live in the Toronto area. I will be reporting back next month on what transpired, and discuss any information that can help us live with wildlife. I’ll also take a closer look at some of species that draw the most ire from urban residents and offer some solutions.