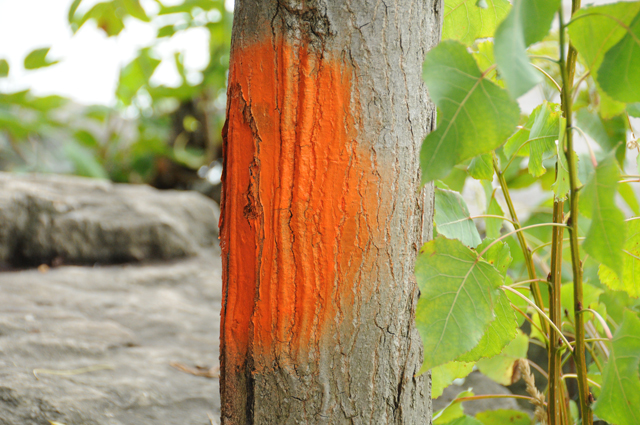 Given the frighteningly eventful year, I’m inclined to be less than thrilled with the typical contrived Hallowe’en decorations and antics. I wonder if there’s an equivalent to Scrooge’s “Bah Humbug!”?

Hallowe’en trappings which we normally see and are meant to frighten, pale in comparison to their surroundings. The real scary stuff lies unnoticed or undetected to the casual eye. I see a chilling scene available all year unless the snow cover does its job. In my local haunts, I see everything from invasive species to paved over greenspaces. And forgive me for thinking trees, especially, must have a target on them. Now that’s scary!

Who needs to buy Hallowe’en decorations when they are readily available in most front yards? Work with what you have and have fun with embellishments.

Destructive aftermath from wind and ice storms can be used. The ice storm aftermath left many branches raw and ragged. If you have a tree damaged by the ice storm and branches have not been trimmed, you have some bare bones to start with for that spooky atmosphere.

And if you must add a little human drama…invite a friend like “Jake” to hang around for awhile.

Broken branches caused by ice or wind storms are one thing. But in the city, we have to deal with wilful damage by passers-by. Many trees in urban areas are subject to violent acts.

A more sustainable idea is to use dead limbs lying around from windstorms to create the effect.

Many homeowners decorate their shrubbery or trees with fake spider webbing. But some city trees are adorned differently…

Pasting chewing gum to a public tree shows a total disrespect for our green infrastructure. A horrifying sight for the tree lover!
A more likely scenario is to find gum as waste discarded on the sidewalk. Chewing gum was a natural product, “chicle”, but many modern day gums use petroleum-based polymers, hence those persistent, black blotches on sidewalks. Yuck!

Vines can be used for a creepy effect. You may even have one or more vines which have gone feral on the boulevard. However, Hydro companies do not like it at all and will remove vegetation if they are servicing their utility lines. 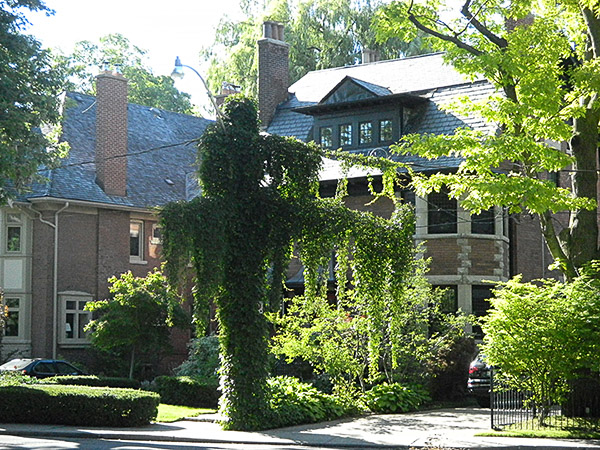 Others have out-of-control creeping vines taking over their house. 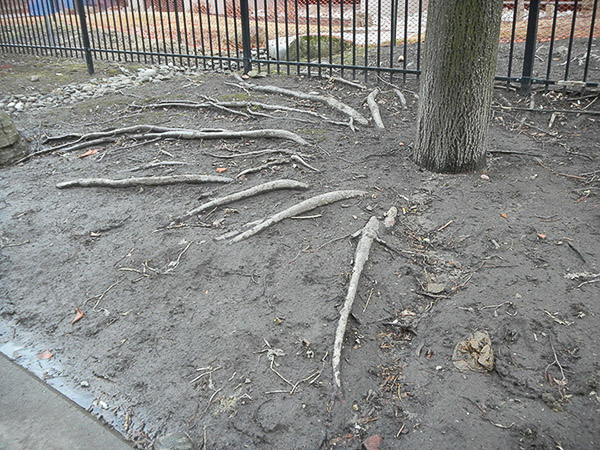 Don’t throw them out leave your leaves!

…unless it is Norway maple leaves with tar spot fungus (Rhytisma sp.). The spores survive our backyard composting efforts. But then again, if tar spot persists and spreads, it’s another incentive to plant our native maples. Who would want to plant an invasive Norway maple in their yard if it ends up with such large, unsightly blemishes?

If you have cherry trees, they are susceptible to Black Knot (Dibotryon morbosum). In a forest setting, it’s a normal occurrence. It’s not the Black Death. But if you have a specimen tree, it is best to trim branches that are afflicted with black knot to contain the spread of the fungus.

A pile of wood chips could be mulch, but it could also allude to something more sinister – it could indicate the resident tree has died and the root has been ground out.

As foreshadowing to Hallowe’en, you may have encountered this scene in the summer…

As foreshadowing to Hallowe’en, you may have encountered this scene in the summer…

The invasive EAB is decimating populations of ash trees in North America. In southern Ontario, treatment must be administered to healthy trees during the growing season (before September).

What happens to ash trees which are heavily infested with Emerald Ash Borer and cannot be treated? Chainsaw massacre!

And then some of them come back from the dead…

Green ash was planted extensively as a boulevard tree in the 1980’s. With the onslaught of Emerald Ash Borer, many smaller trees were cut pre-emptively and replaced with other species. EAB attacks the stem but not the root. As a last gasp, suckering at the base may occur.
Bring out the Heavy Artillery

Trees wrapped in burlap are used to protect evergreen foliage from the desiccating effects of winter wind and salt spray. But it’s really meant for wimpy exotics. Native trees such as cedars shouldn’t need this protection. However, make sure the tree root zone is well watered before freeze up and don’t plant too close to roads which receive a lot of salt.

Take an empty plot (just soil) and let things take shape for a few weeks for an invasive effect.

I don’t which is more frightening – but loss of greenspace and biodiversity is right up there with invasive species. Consider the signs as tombstones:

The Downfall of the Native Plant Garden – it’s not scary!

In terms of Hallowe’en material, native plant gardens in general are not frightening, even if the neighbours think otherwise. Pollinators which don’t resemble benevolent-appearing butterflies, such as bees, wasps, beetles and ants are not scary either.

Many wildflowers are tall. Height should not invoke a state of panic in the community. Pollinators, such as bees, are a natural consequence of having wildflowers.

This is not vandalism. It’s the creative work of Mother Nature.

There’s always an exception (or two) to the rule. In some cases, native plants can scare…